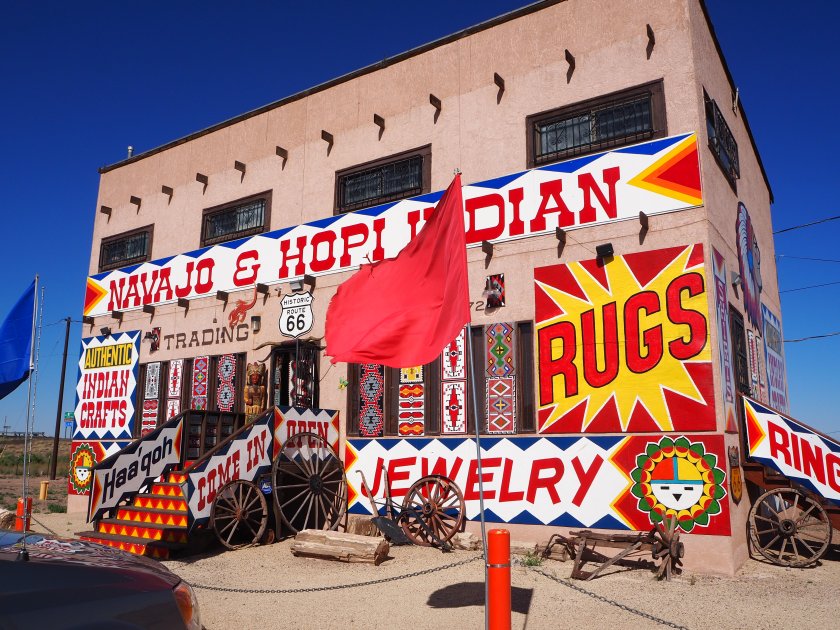 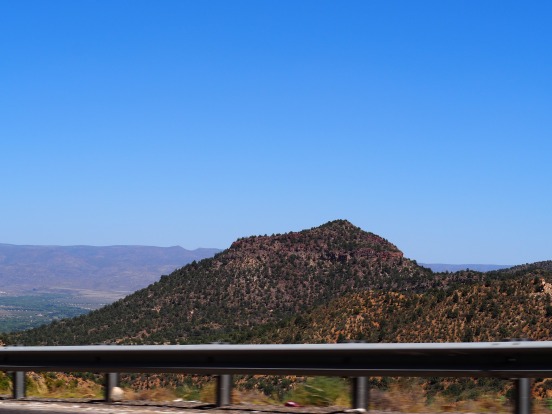 We had a seven or six hour drive to complete by the end of the day, so we left Arcosanti and got on the road to Albuquerque. I drove and I’m still not sure if it was six or seven hours exactly but I do know that our journey took at least nine hours.

At one point during our drive, I took an exit that told us it would lead to “The Meteor Crater” which sounded cool, so I followed the signs. I had been under the impression that it was not that far away but the signs took us on this long winding road that went on for a far greater distance than I had anticipated. We passed many signs about the crater, including one that advertised a Meteor Crater radio station, which I promptly tuned into. We started getting all these facts about the crater. One fact was during the 60s and 70s, NASA astronauts trained in the crater to prepare for the Apollo missions to the moon. In 1964, a small plane crashed into the edge of the crater. In 1984, the crater was the destination of the protagonists in Starman, a film starring Jeff Bridges, Karen Allen and Charles Martin Smith. More information about the place here.

The land changed and became really flat, and after a while, in the distance, this oddly shaped jagged mountain shape emerged.  Since I was driving I don’t have many pictures of this but we drove right up the hill of the crater to a parking lot and then tried to get into the Visitor’s Center building where we found out there was an eighteen-dollar admission fee. We personally felt like this was rather exorbitant for a natural landmark that was much farther out of our way than anticipated. So we left. But here is a picture from the parking lot. 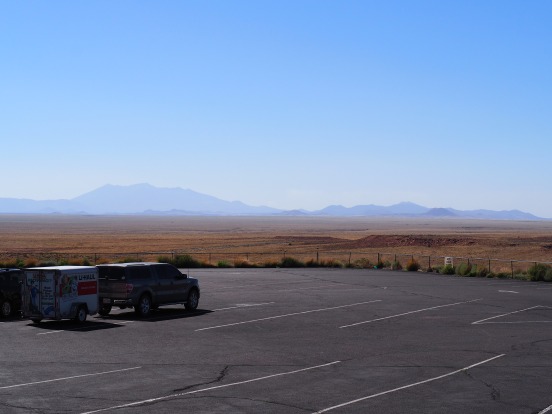 You can see Humphrey’s Peak among the Kachina Peaks Wilderness in the Coconino National Forest, the highest natural point in Arizona, sort of north west from the parking lot.

Here is an actual image of the Meteor Crater, which I am borrowing from Caravantomidnight.com. 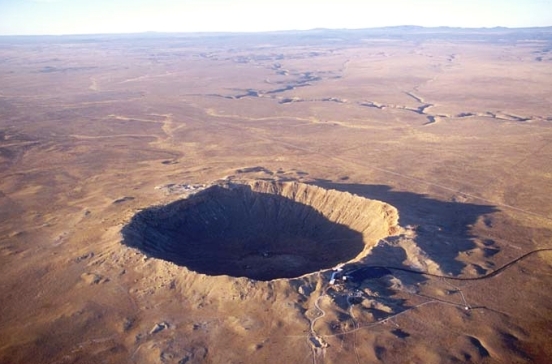 Borrowed from the article “Lucky Strike,” at caravantomidnight.com

After getting back on the road and driving for a couple of hours, we were near Holbrook (AZ) driving along Route 66. I spotted this place from the high way and we pulled over to look at it. 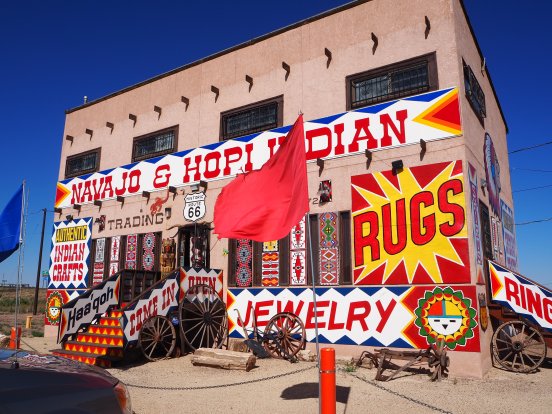 We had an awesome talk with the man who worked there, Brian Moody (Navajo), and I bought some beautiful jewelry. Brian gave us a lot of advice when he learned we were from way out of state and were driving around the southwest. We told him we were driving to Albuquerque and he said, “Oh yeah, that’s a nice city to drive into at night.” He talked about the people who came into his shop and specifically one guy who came in by chance one day and then drove back four hours the next day to get a specific skull he had seen on display. He then tried to entice us with a fox skull that I had been looking at.

Along the six or seven hour drive we passed signs for Horsethief Basin, Bloody Basin, Horse’s Head Basin, which caused a great deal of speculation about how these basins came to be named, if these incidents were related to each other, if it had to be a repeated offence in a basin for the basin to be named after it, if the basins were connected by waterways. If it was all about the same horse. Another sign read “Crown King Bumble Bee” which we really enjoyed saying over and over again. Even days after, a short silence would precede one of us saying, “You know what? Crown King…. Bumble Bee…” and we would nod and gaze off into space in different directions. 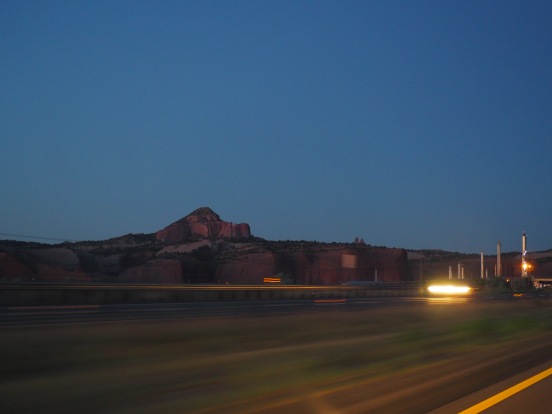 We stopped for dinner in Gallup, after finding a place on Debbie’s phone that was precisely three minutes away from our spot zooming along the highway. We pulled into Garcia’s Sunset Grill Restaurant and when we walked in, a guy who I can only assume was Mr. Garcia spoke in Spanish to us. When we looked at him in confusion he said, “Can I help you? Are you lost?” And I said, “We’re not lost, we’re hungry,” And he replied, “Oh, then you’ve come to the right place!” with a smile and handed us two menus entirely in Spanish. We had a delicious meal while watching these giant slow moving trains of stacked shipping containers amble by across the street. Our meal came with rice putting, and when I told Mr. Garcia that it was the best rice pudding I’d ever had, he smiled and said it was his great grandmother’s recipe. 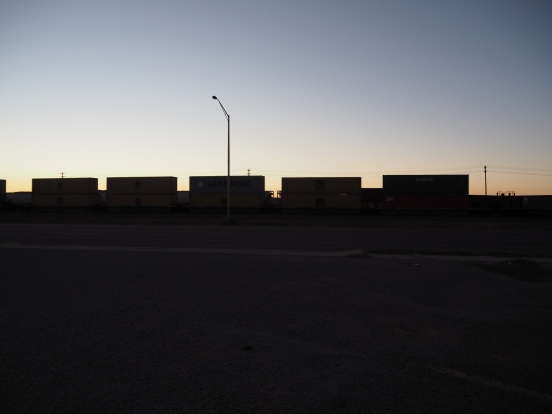 We had told the people we were staying with, old family friends, that we would be arriving around 10:30 pm, hoping that we could maybe get there around 10 and that it wouldn’t be too late. However, that ended up being completely wrong because we had forgotten about the time change between Arizona and New Mexico, even though at some point when I was at the wheel and trying to keep Debbie awake, I had monologued deeply on this whole mental riff about traveling through time and space and state lines, traveling into the future. I managed to entertain myself with this for a while before realizing that Debbie was already asleep in the passenger seat next to me and probably had not just been keeping her head angled that way to stare intently out the window as I had assumed for at least twenty minutes.

We ended up arriving around 11:30 at night, which was considerably later than we had anticipated and pretty damn inconvenient for our hosts on a weeknight. They claimed it was completely fine, but that’s just because they are really awesome people who probably don’t always say what they are thinking out loud.

Consequently, when Brian Moody had said that Albuquerque was a great city to drive into at night, we didn’t really know what he was talking about yet but it is beautiful. You sort of crest a really gradual hill and then suddenly thousands of lights fold out in front of you. As you get closer and closer, the city expands until it stretched out on the dark horizon in either direction but you still haven’t actually reached the city yet, you’re still driving on a lone highway towards it. It was sort of breathtaking. 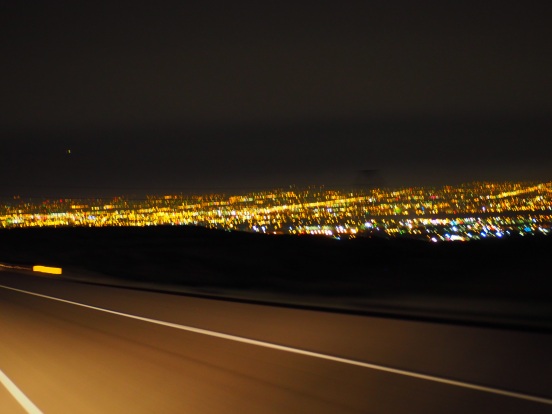 Blurry photo of Albuquerque at night.

One thought on “The Drive to Albuquerque”