After leaving the Desert Botanical Garden, we found a Japanese market with deliciously refrigerated rice balls and tasty bottled teas.  I had two rice balls, one with tunafish and one with pickled kelp. It was very refreshing.

Then we went to the Heard Museum. The Heard Museum is not a history museum, it is a living museum featuring both artifacts and contemporary art. The overall mission is to educate the public about the living cultures and native peoples of the Southwest.

Map of the traditional homelands

Map of present day tribal lands, showing how the tribes were moved 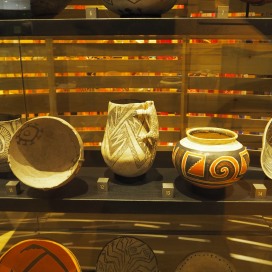 The Heard Museum is a great resource and has a mix of educational, historical exhibits and galleries of current artists. 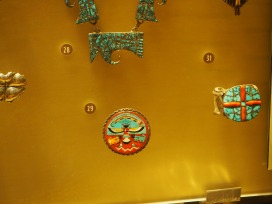 This was one of the most striking paintings I saw. It depicts the first atom bomb testing on July 16th, 1945, upwind of Apache lands.

The plaque next to the painting reads, The Mescalero Reservation is downwind of the Trinity Site, where the first atomic bomb was tested in 1945. The artist states, “the elders believe the bomb has given cancer to the earth and to women from Mescalero, where there is a high incidence of the pathology. I think Manifest Destiny is still happening.” Enjady lost his mother to caner.

Seeing this painting made me think about the ways in which we can passively take part in ethnic cleansing.

The Heard Museum was another place I didn’t feel like I was able to spend enough time in to truly absorb everything it offered. It was an incredibly interesting and worthwhile experience nonetheless. I wholeheartedly encourage anyone in Phoenix to visit the museum and the Desert Botanical Garden to learn about and experience the area. I feel like I could go back to both places and find something new I hadn’t noticed or paid enough attention to before.

After the museum closed on us, literally – we were the last ones out, we hit the road to drive to Arcosanti, where we would be spending the night. 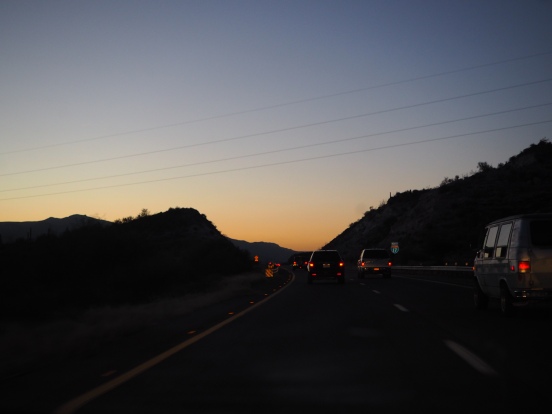 On the road to Arcosanti 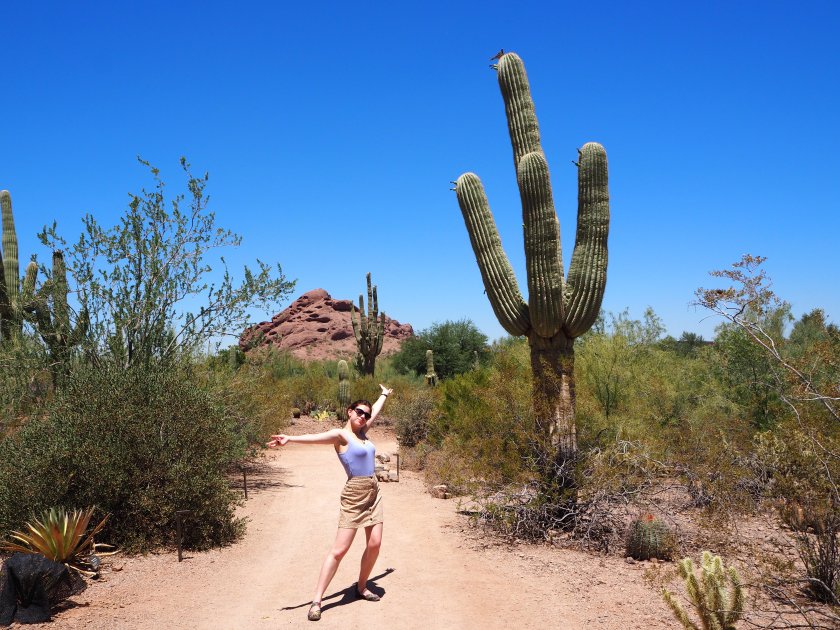 We stayed in an AirBNB and the next morning drove around trying to find a panaderia for some breakfast. I don’t know why I was so wild for a panaderia but I woke up fantasizing about all the tasty bread creations only to be found at a panaderia.

Then, we went back to the Desert Botanical Garden. It was an incredibly interesting and extensive place, and we had only gotten there in the evening the day before, which severely limited what we were able to see. We hadn’t been able to go on any of the trails or explore the different “regions” of planted areas, so we tried to capitalize on our second opportunity and see everything. The previous evening the place had seemed sort of magical and enchanting as the colors and air changed with dusk and eventually night. Also, my camera had died prematurely before we were officially kicked out at nine pm, so I felt like my first experience of this awesome place had been disorganized and cut short. Luckily it had also been free, though.

In the daylight, the Desert Botanical Garden was an even more enthralling place. It’s a large pocket of seemingly undeveloped land in the middle of Phoenix and when you’re there, you forget you’re in the middle of a city. It’s in a shallow valley and the surrounding hills are part of the conserved desert land. The diversity and layers of the desert sort of unfold as you walk down pathways, revealing beautiful and striking plants (and sometimes animals) that change visually with your perspective. There was nothing to overlook, even trees that you had been walking beside for sometime would actually be a unique kind of tree, that’s bark contained photosynthesizing cells so it could make food for itself even in a draught. That tree, by the way, is the Palo Verde Tree, native to the Sonoran Desert. Phoenix was built right in the middle of the Sonoran Desert, which has many unique and legendary animals and plant species. I had seen palo verde trees in many places since arriving in Phoenix but only really noticed them once we were in the Desert Botanical Garden.

View of a hill

Debbie with some palo verde 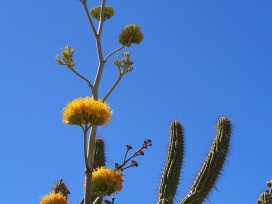 This is a ground squirrel. It looks like a baby prairie dog, which is what some people, who shall remain unnamed, claimed it was. But we saw an informative plaque and also spoke to a person who worked at the DBG.

There were also many lizards.

Here are more pictures I took while hiking around the Desert Botanical Garden. 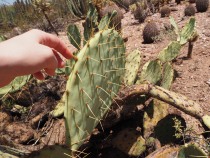 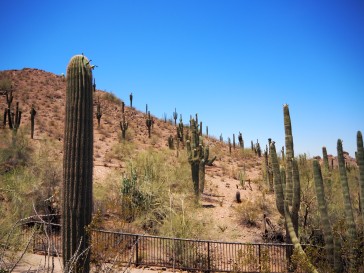 Hiking up and down the hills

Camelback Mountain in the distance

From a lookout point 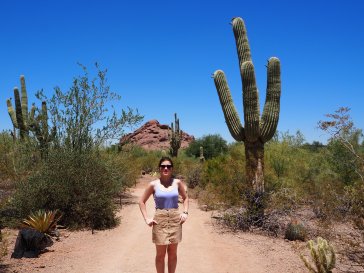 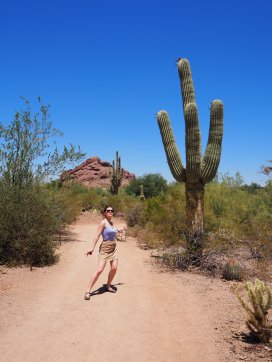 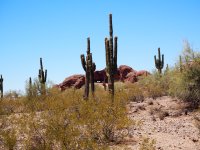 Eventually, sadly, we had to leave the Desert Botanical Garden or die. It was already over 100 degrees (F) as it neared the middle of the day, and we started to notice, walking around this vast place, that we ran into fewer and fewer people as the day approached noon. Meaning that we saw no one past 10:30 am. The evening before, the more landscaped part of the gardens had been crowded with families and people chasing quail, but in the middle of the day this place was (literally) deserted. For a very excellent reason, we were finding out. We ran out of water and had to drag ourselves back through the winding trails of the desert towards civilization – the parking lot and gift shop/fancy restaurant/bathrooms and lockers. While recovering in the gift shop, Debbie bought a little cactus, I bought a Desert Botanical Garden water bottle, and we both bought prickly pear cactus licorice. We were completely and utterly taken in by the vast array of cactus-flavored gourmet food and candy, and each ended up coming away with respectable amounts of overpriced sugar.