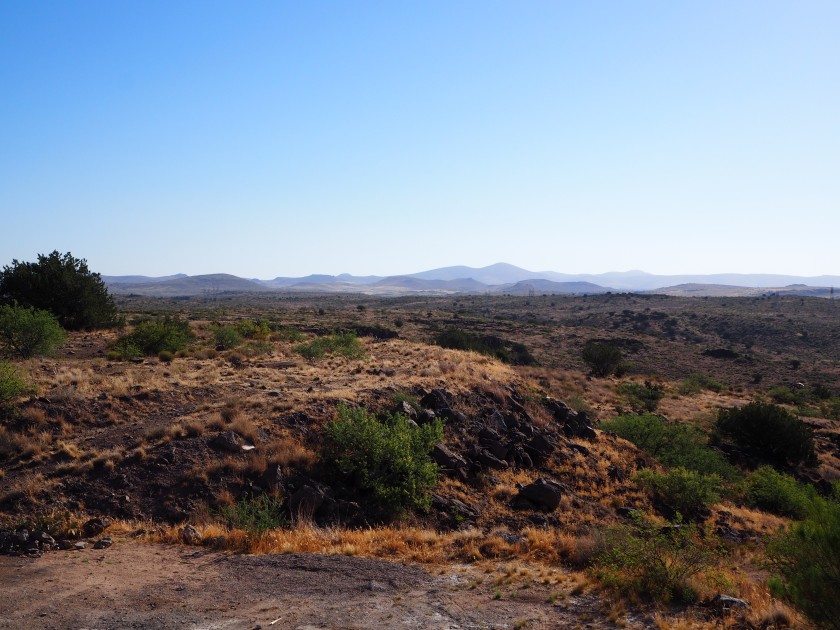 Arcosanti is an experimental town near Meyer, Arizona, built into and on top of a mesa.

It was built by Italian-American architect Paolo Soleri, starting in 1970, around the concept of “arcology” – architecture and ecology, creating architectural design principles for very densely populated, ecologically low-impact human habitats. The term itself was coined by Paolo Soleri and at least to my mind, the ideas around it appear prominently in science fiction. Which is very funny because Arcosanti itself looks like something out of a George Lukas film. Here is a link to Arcosanti.org. 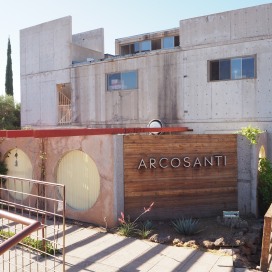 View over the forge

While Arcosanti is not completely self-sufficient, it comes pretty close. Below are pictures of the forge where the bronze bells Arcosanti is known for are made, and also where a friend of Debbie’s works.

On a ledge looking up into the forge 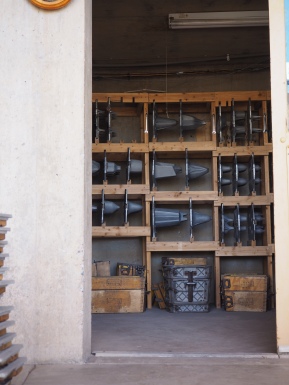 Casts of the bronze bells

The bells are everywhere around Arcosanti

Bronze, or metal, and ceramic art, both functional and decorative, is sprinkled around the poured and painted concrete of Arcosanti. The large dome ceilings and circular windows and doorways are sort of majestic and fill spaces with light and fresh air.

Mess hall from another angle 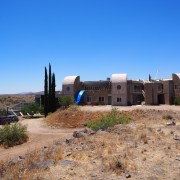 View of the living quarters

Arcosanti is known as an architects’ retreat.  We stayed overnight in one of the rooms with a loft, which you can see in a picture above.  Breakfast was complimentary and the homemade yogurt was delicious. I think dinner would have been complimentary too, if we had been there in time the night before. 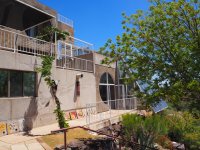 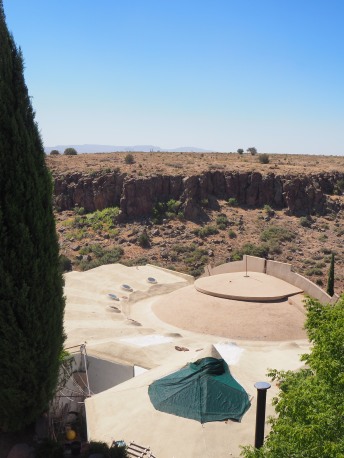 View over the forge 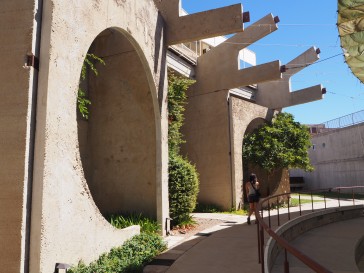 View from the top of another dome

While we were walking around with Debbie’s friend, Ali, suddenly – I couldn’t tell if something like a very small rock hit my face or just my sunglasses, which gave off a huge crack, startling everyone. It was very discombobulating. The frame holding the left lens broke and I could feel the jagged edge against my cheek.  I was looking around wildly, clutching my sunglasses, asking, “What happened, what was that? Did you see a rock?” Debbie was also turning all around, but Ali just nodded sagely, squinting off into the distance, (sunglass-less), and said, “Yup, Arcosanti kills sunglasses.”

This immediately had our attention.

I stared at her solemnly for a moment.

“Have your sunglasses been broken here?”

She was thoughtful for a second, then said, “ I actually lost mine a while ago,” then she went on to say that she knew a bunch of people whose sunglasses had mysteriously broken or disappeared at Arcosanti, one person who had three successive pairs of sunglasses bite the dust.

It was strangely ironic that these sunglasses I’d had for four years spontaneously decided to die on me when I was in the Southwest, a place where I might need them a lot. I continued to use my broken sunglasses anyway, just carefully.

Walking along a ledge below the forge

Every roof was also a patio

On the other side of the mesa

View from the top of another dome 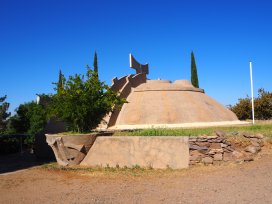 View from inside the room we stayed in. 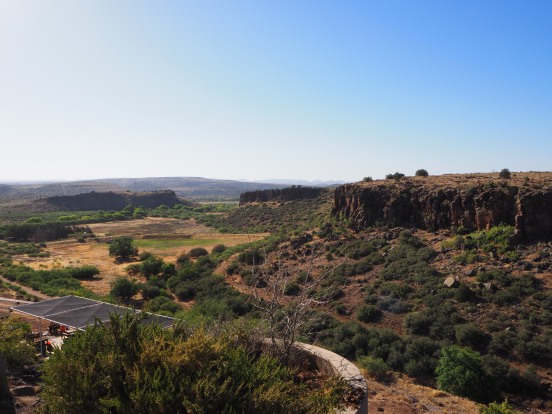 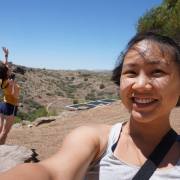 This place was beautiful, and the crowd of architects and artists at Arcosanti who lived and worked there were also very interesting and kind. It was a really welcoming community.  Here are two last photos of the kind of random art we would find walking around Arcosanti. 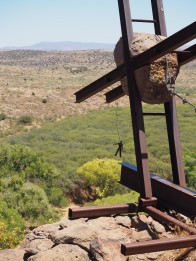 Me, in the sunglasses shortly before they were mysteriously injured